1) MSG suggest that West Papuans should make a united and inclusive application for membership
2) West Papuan freedom fighters call on PNG to be first to stand against injustice.
3) Statement by Yan Christian Warinussy, Executive Director of LP3BH-Merauke

A Special Melanesian Spearhead Group leaders' summit in Port Moresby has welcomed West Papua to be part of the MSG... but

2) West Papuan freedom fighters call on PNG to be first to stand against injustice.
In their ‘Free West Papua Campaign’, they appeal for PNG to speak out for their identity and freedom. 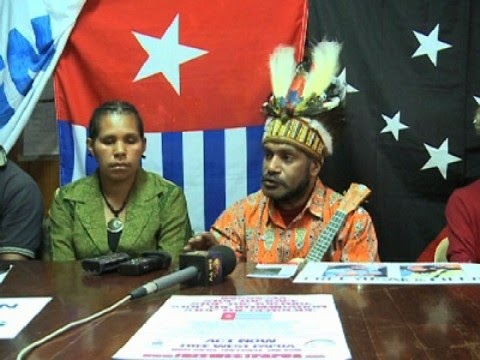 As a lawyer and defender of human rights in the Land of Papua, I
want to draw attention to two very important issues that need to be
dealt with in order to end the appalling human rights situation in the
Land of Papua.

The first is that President Susilo Bambang Yudhoyono (SBY) as he
comes to the end of his term as President of Indonesia, will order the
release of all political prisoners in the Land of Papua and secondly,
he should allow access to foreign journalists and human right NGOs and
activists to the Land f Papua.

In my opinion, these are very pressing problems that should be
dealt with before the end of the President's term. This would provide
a positive view for the Papuan people and for Indonesia and would
ensure that the international community acknowledges the credibility
and quality of the democratic views of the Indonesian government.

I am certain that the international community  will be impressed by
the achievements of SBY, the first president of the country to be
democratically elected and who gained the support of the Indonesian
people in leading this huge democracy for ten years.

SBY should be regarded as the president who decided  to release
all the political prisoners in Papua which according to the latest
figures amount to altogether 72 prisoners. who have spent many years
in prison simply because they hold different opinions about the
situation there than the government.

Giving access to foreign journalists and international human
rights activists to enter West Papua will mean that more balanced
information will be available to counter the negative views that are
held about a country which is currently seen as one of the worst
violators of human rights in the world.

Looking into the future and the forthcoming presidential elections
on 9 July this year, I hope that especially with regard to the
provinces of Papua and West Papua, the problem of human rights
violations which have lasted for fifty years will be brought to an
end, as well as allowing access  to foreign journalists and human
rights activists, which I hope will be part of the programme of the
candidates standing for president and vice president.

By Andrea Wijaya on 11:05 pm Jun 26, 2014
Category Featured, News, Politics
Tags: 2014 Indonesia Presidential Election, Allan Nairn, Prabowo Subianto
Jakarta. The controversy surrounding American award-winning journalist Allan Nairn and his 2001 off-the-record interview with Prabowo Subianto ratcheted up a notch on Thursday afternoon after Nairn invited the presidential candidate to sue for libel.
Nairn called on Prabowo to say whether he wanted him arrested and that he would be glad for the opportunity to accuse Prabowo of crimes against humanity in a court of law.
“I am currently in Indonesia so if the TNI [Indonesian military] would like to capture me, they can,” Nairn wrote on Thursday .
Nairn recently published a segment of his 2001 interview with Prabowo on his blog. The interview was conducted on an off-the-record basis, but Nairn has decided to break this bond 13 years later on public interest grounds.
“I think the harm of breaking my anonymity promise to the general is outweighed by what would be the greater harm of Indonesians going to the polls having been denied access to facts they might find pertinent,” Nairn wrote.
Nairn cited a statement put out by Prabowo campaign spokesman Budi Purnomo on June 26.
“Allan Nairn is an American journalist who is known to not have a good relationship with the TNI,” Budi said as quoted by Merdeka.com. “[The] TNI has even said that they are going to capture Allan if they learn he has returned to Indonesia.”
Nairn was imprisoned repeatedly during the Suharto era for reporting on rights abuses by the security forces in what was then the Indonesian province of East Timor. He dismissed accusations that he was now working as a puppet of an anti-Prabowo United States.
“One of my main criticisms of the US for the past 40 years has been of their practice of exploiting and killing poor people around the world, including in Indonesia,” Nairn wrote, adding that the TNI was “one of the many” US-backed forces utilized to kill civilians.
“In my view, the two most important facts about Prabowo are, first, that he killed civilians, and second, that he killed them while being sponsored by the United States,” he wrote.
In 2012, Prabowo told Reuters that he was still being denied entry into the United States due to allegations that he had instigated riots in the aftermath of the May 1998 resignation of Suharto, who was Prabowo’s father-in-law.
Prabowo’s former commanding officer, Wiranto, told journalists last week that Prabowo had been thrown out of the military for exceeding his authority by ordering the kidnapping of pro-democracy activists.


“As to my writing about Prabowo, it is accurate,” Nairn wrote. “If the general wants to deny this, I invite him to face me in the Indonesian courts by filing criminal libel charges against me.”
Posted by AWPA Sydney News at 1:19 PM