According to the press release received military Puspen majalahselangkah.com, gunfire occurred around 05.00 am, when soldiers on patrol in the area around Tingginambut, Puncak Jaya, Papua.

TNI also get two long-barreled firearms. Written there, the intensity of patrol in Puncak Jaya further enhanced because adjacent to the Presidential Election ballot.

As of this writing, there is no description of the TPN / OPM is associated penemakan.

Known, the conflict in Papua last 50 years and there has been no comprehensive solution.

2) IN MERAUKE REGENCY, MALNOURISHMENT CHILDREN ARE FOUND EVERY YEAR 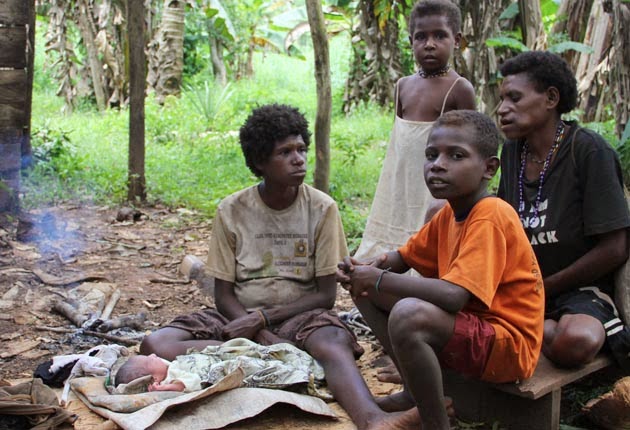 Women and children in Merauke (IST)

Merauke, 7/6 (Jubi) – Head of Health Department of Merauke Regency, dr. Stef Ozok said poverty always lead malnutrition to the children.
“The medical staffs found this when the parents took their children to the integrated health care for health examination including immunization,” Ozok said to tabloidjubi.com at Iteze Hotel Merauke on Wednesday (4/6).
According to him the malnourishment children are always found every year. The number is various for every sub-district, it’s around 15 – 30 percent.
“I can’t tell the number in detail, the data is at my office,” he said.
He further said poverty is a factor of malnutrition among the children because the parents couldn’t buy their children’s needs such as food and milk. It affected their growth from time to time.
Chronic disease is another factor, he said.
“When a child got malaria or other disease while the healthy food was always well served. A child from wealth family could possibly experiencing malnutrition because consumed more sweets,” he added.
He further admitted malnourishment was equally found everywhere, not only the villages but also in the urban. The poverty and chronic disease are the main factors.
“I asked the parents to continue caring their children. They should maintain the daily consumption very well to help growing healthy,” Ozok said.
The Sub-district Chief of Tabonji, Wilhemus Harbelubun said on this occasion that his office always develop good communication and maintain good relationship with the local medical staffs.
“I always encourage the people to bring their children to the community health center for health examination,” he said. (Jubi/Frans L Kobun/rom)
----------------------------------------------------------------
Posted by AWPA Sydney News at 3:15 AM