Jayapura. Police said that two firearms, some traditional weapons and a thousand rounds of ammunition seized in a Jayapura raid had been smuggled in from Papua New Guinea and was destined for anti-Jakarta groups in Puncak Jaya.
Local residents reported hearing gunshots during Wednesday’s joint military and police raid at Holtekamp Beach near Jayapura, during which three alleged smugglers were arrested. Police said three suspects, Tiba Tabuni, 42, Edy Wakur, 37 and Denu Wetipo, 19 were being detained at Jayapura police headquarters.
According to a report in Vivanews, at least one of the arrestees was shot in the leg by officers during the raid.
Papua Police chief Insp. Gen. Tito Karnavian, accompanied by Cendrawasih military commander Maj. Gen. Christian Zebua, said that the firearms and ammunition had been brought across the PNG-Indonesia border over a number of trips, and were to be carried to the highlands town of Wamena before being sent to separatist groups in remote areas of Puncak Jaya via couriers.
Papuan language groups thousands of years old pre-exist the colonial partition of Papua Island, leaving families and ethnic groups split by the modern PNG-Indonesia border which runs unmarked for most of its length through some of the most difficult terrain in the world. People cross relatively freely on a daily basis.
Many Papua New Guineans are sympathetic to West Papuan calls for self-determination and are inclined to turn a blind eye, or even to assist, anti-Jakarta separatists taking refuge on the PNG side of the border.
Police said that Wednesday’s arrests stemmed from a month-long joint operation with the military designed to ensure the smooth running of the upcoming presidential elections. 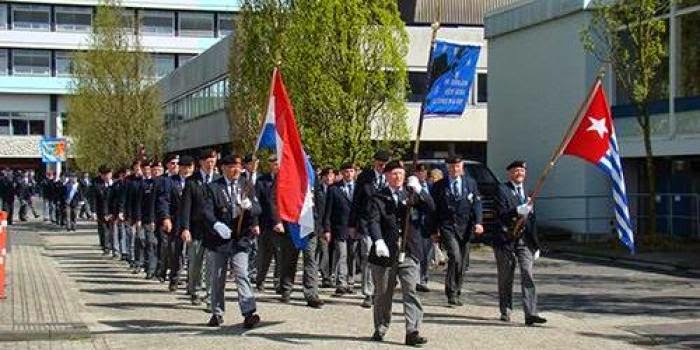 Lieutenant Colonel Klaas Flowers (77) which is affiliated with the Association of Dutch New Guinea Soldiers (VNNGM) said, the Governing Committee for Veterans Day prohibit Embassy (Embassy) in The Hague has urged to ban carrying the Morning Star flag.

"Ridiculous that the organization has been subject to pressure from outside," said Klaas telegraaf.nl Flower was quoted as saying.

Merdeka Papuan activists in the Netherlands, in an interview Oridek Ap electronics with majalahselangkah.com justify it. "True, the embassy urged. 'But they thought that we had addi kampanje in the Netherlands," said Oridek on Friday (27.06.14).