There have also been claims that Indonesia holds political prisoners from West Papua with some jailed simply for attending flag raising ceremonies of the West Papuan flag — the Morning Star.
And with Mr Yudhoyono in the country, churches are making their opinions known in the hope of encouraging dialogue on West Papua.
Pacific Conference of Churches General Secretary, Reverend Francois Pihaatae acknowledged Mr Yudhoyono's visit was a sign of PIDF's growing profile.
Yet he advised caution.
"The glamour of State visits must never undermine the community's responsibility to search for the truth," Mr Pihaatae said.
"And regional governments must not let Susilo Bambang Yudhoyono's presence at the PIDF cloud their judgment on the issue of self-determination in West Papua."
He said the visit could be attributed to Indonesia furthering its Pacific interests but questioned whether it was also influenced by growing regional support for West Papua and a push to usurp Australia and New Zealand from their traditional seats of Pacific power.
"Where our self-determination interests are concerned, whether it be in the areas of governance, development and security, or our firm support for West Papuan freedom, we cannot allow the State visit to cloud our prudence and better judgment."

The Methodist Church in Fiji said its immediate concerns was human rights abuses in West Papua and called for action from leaders.
Church spokesman James Bhagwan said they understood Fiji was strengthening ties with Indonesia but also pointed out its close relationship with fellow MSG member PNG.
Anglican Archbishop of Polynesia Winston Halapua said the time for complacency on West Papua was over.
"We cannot in this part of the world say that is out there — no they are part of us — the leadership has to come from inside and their part is to be clear what they ask of us."
In his speech to the PIDF yesterday Mr Yudhoyono said Indonesia believed that "peaceful settlement of disputes; abiding respect for norms and principles that govern inter-state relations; and respect for universal democratic values, an alternative vision of a world at peace and in prosperity — a pacific world — is attainable."
He also told Indonesian paper The Jakarta Post that he would address the issue of West Papua at the PIDF summit.
"Therefore, we hope the matters on Papua, which are often internationalised by certain elements, can be overcome by, among other things, establishing strong and good ties with the countries of the South Pacific," he said.
He also said he would use the forum to reduce misinformation and disinformation on the West Papua issue.
-----------------------------------------------------------------------------
http://www.radioaustralia.net.au/international/radio/program/pacific-beat/indonesian-president-motivated-by-his-own-agenda/1330260 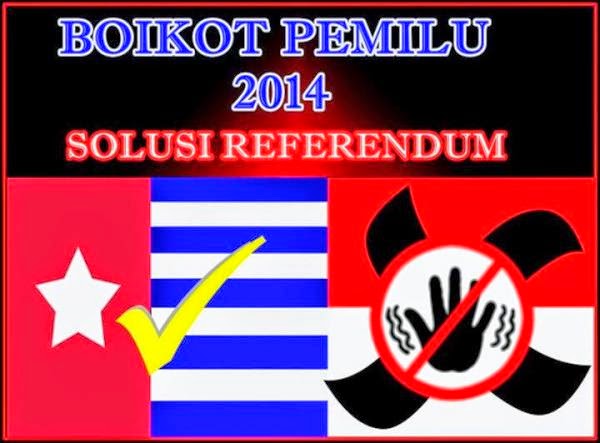 Papuan nation's future is in the hands Jokowi Nor Prabowo

Interview With Bucthar Tabuni, chairman of the National Parliament of West Papua (Part 1)
Unscrupulous Police Serious human rights violations must be brought to the Court of Human Rights
Police Disband Peace Action Demo KNPB Disappearance
Keep Resounding echoes Papua, Indonesia Tense
"I would say the future fate of the people of West Papua is in our own hands. Nonsense to say after Jokowi or Prabowo became President, the fate of West Papua would be better, it's nonsense statements, "said Kossay, to suarapapua.com, Friday (20/06/2014).
According Kossay, who prosecuted the West Papua National Liberation Army (TPNPB) in belentara forests of Papua, Papuan independence activists in places of escape, with masses of people since 1969 is now higga political rights and sovereignty of West Papua.
"We want an independent and sovereign leluher our own on the ground, Melanesian country. We did not ask for food, drink, welfare, and other lure, while pembantaiaan and killing of Papuan people still continue to be made by the military / police. "
"It should be remembered by anyone Papuans, also the Jakarta government, political party leaders locally and nationally as well stop fooling the people of Papua with something that is not definite. I'm firmly stop the devious actions, "said Kossay.
It is said, the current diplomacy diplomats Papua built in the UK, Mr Benny Wenda, and in the United States host Octovianus Mote, as well as in the countries of the Pacific host Ondawame Ottow, et al still continues.
"Papuan People need to know, our diplomacy at the international level is still ongoing. Not that euphoria legislative and presidential elections will stop their actions, the same sekalii I say that will not stop perjuangana the people of West Papua, "said Kossay.
In Papua itself up Kossay, KNPB, West Papua National Parliament (PNWP), with organs and other factions still exist to fight for political rights for the people of West Papua.
"KNPB had never retreat. We still continue to exist. Mako Tabuni be shot dead by the leadership of Tito Karnavia Detachment 88, Bucthar Tabuni be given the status of DPO, Victor Yeimo may be in jail, but they still keep fighting spirit with us, "he added.
Kossay also called on the people of West Papua, and KNPB members across Papua to not participate in the upcoming presidential election provide options.
"From the beginning KNPB have agreed to boycott presidential election. Therefore we will never participate in the politics of colonial Indonesia. We will continue to boycott the presidential long as there is in Indonesia, "he concluded.
Papua Police Chief related responses, Tito Karnavia which will criminalize anyone who mmboikot Presidential Election, Kossay said himbaun like it is a form of intervention, intimidation, and character assassination every individual who is a free society.
"Let me give you an example, if Tito Karnavia eat wam unusual or forbidden in the religion, but because there is the threat of a criminal, or be sentenced to jail, whether he will still eat, right answer is definitely not going to eat anyway; If it continues to be forced to eat, meaning that it forcibly commit human rights violations against Tito sir. "
"Now we stay behind alone, Papuan people did not want to give the option to presden RI feeling not part of this country, whether forced or imposed when then we will give you the option or vote again, the answer is not yet; So I hope that the police chief did not play forced-forced, and understand the current context, "he said firmly.
Oktovianus POGAU
---------------------------------------------------
Posted by AWPA Sydney News at 1:07 AM