1) US goverment donates $8 million for health program in Papua

1) US goverment donates $8 million for health program in Papua

Tue, June 10 2014 22:03 | 474 Views
Jayapura, Papua (ANTARA News) - The government of the United States of America has donated U.S. 8 million dollars for a health program in four districts of Papua Province.The U.S. Ambassador to Indonesia, Robert Blake, said during his work visit to the Dosay Community Health Center in Jayapura on Tuesday, the 8 million dollar fund had been donated to the districts of Jayapura, Jayapura City, Jayawijaya and Mimika."The purpose of this donation is to improve local health administration capacity, so that the health of mothers and children will be better protected, particularly from the threats of HIV/AIDS and tuberculosis," Blake noted.Through the United State Agency International Development (USAID), the U.S. government has been focusing on the work of health programs since March 2012, including the prevention of HIV/AIDS, tuberculosis and malaria.Blake added that USAID also cooperated with UNICEF and local non-government organizations (NGOs) in promoting HIV/AIDS awareness and prevention."Papua has the highest rank in the spread of HIV/AIDS in Indonesia, which is estimated to rise to 2.3 percent. Unfortunately, this number is increasing among the commercial sex workers and laborers, hence we are also cooperating with our partners in promoting the use of condoms to prevent HIV/AIDS," he said.The other program that is funded by the U.S. government is malaria disease prevention by using mosquito nets, which were distributed to the local residents in Papua and West Papua Province."We also support the efforts to inform the people who are sick to go to the community health center," he noted.During his work visit, Ambassador Blake also praised chief of Jayapura District Mathius Awitouw for his supports to the USAID program in the region.USAID in Papua provides technical assistance to the Ministry of Health and the National AIDS Commission to accelerate the use of effective prevention measures, and to strengthen capacity to gather and use strategic information in response to the epidemic. USAID also helps local NGOs increase organizational capacity and expand the reach of HIV/AIDS health services, and works with UNICEF to improve maternal and newborn care and prevent malaria in pregnancy.(*)
Editor: Heru 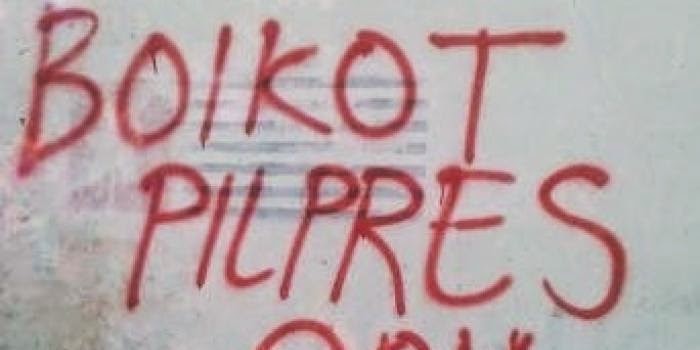 The writing on the wall Rusunawa, Housing 3 Waena. Photo: nestasuhunfree.blogspot.com

This statement came along I KNPB Chairman, Agus Kosay, during a press conference this afternoon, Tuesday (06/10/2014) at the Expo, Waena, Jayapura, Papua.

Bazookas said, "Parliament nasonal KNPB and West Papua (PNWP) have agreed with us as the media and the people of Papua, calling for presidential elections to be boycotted Homeland."

He said, for some time a mutual recriminations between supporters Prabowo-Hatta Rajasa and Joko Widodo-Jusuf Kalla. In his interest to raise the issue of human rights violations to the campaign, such as surgery Mapnduma, Bratayudha operations and other operations led by Prabowo in Papua.

While the murder of Theys Eluay occur in mass Megawati is now in the rear Jokowi.

"Who Megawati it? Anyone Prabowo it? Never mortgaged issue of human rights violations for the sake of Homeland campaign. Remember, our struggle for Merdeka Papuan People is a pure and peaceful struggle," he said firmly.

He further said, "That's the way the invaders, and they are occupiers for the Papuans, not part of the West Papuans and they-they are the actors of human rights violations in Papua. We ask the United Nations to resolve the Papuan problem, promptly sleigh actors criminals humanity in West Papua. Theys is the hero of the Free Papua Movement, if it be a bargain for them it's up to them, we know Theys Eluay Papua is a hero. "

Agus Kosay asserted, the KNPB and PNWP have consolidated 89% in the whole of West Papua to boycott the presidential elections on July 9.

"We will do Boycott Presidential Election in accordance with the democratic way," he said, adding, if there are certain elements of anarchy, KNPB and PNWP not responsible organization.

It is said, when the Republic of Indonesia was proclaimed on August 17, 1945, the Papuans were not involved in the. "The agenda of any of NRKI, is not important for the nation of West Papua," Agus said.

Therefore, he stated, first, it is clear that Papua was not part of the Homeland.

Secondly, anyone who would be president of Indonesia is not going to see the fate of the Papuans, because certain figures terpilihpun there is only killing, raping, stealing natural resources on a golden land of West Papua.

Fourth, we will carry out in accordance with international mechanisms, the information circulated to all indigenous Papuans as part of indigenious People.

Sixth, we extend our thanks profusely to the people of the Papuans to boycott and our prediction of 70% which will follow the Legislative elections, 30% of which will be a boycott. But even reversed, we expect 40% of people who actually make the selection but the reverse boycott Pileg 60%, 9 April 2014 then, is a sign of awareness for the Papuan people that they are being colonized by Indonesia.

Seventh, on the day of the presidential election, we hope that the army / police do not force people to follow him. Let the democratic society it is appropriate to translate each respective ideologies.

The call to boycott the 2014 presidential election in Papua, you can read here: Click. (HY / SYO / MS)
Posted by AWPA Sydney News at 2:01 PM