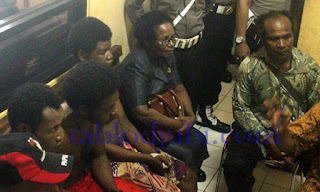 Three young men that had been kidnapped and tortured went to police office with their family – Jubi
Yogyakarta, Jubi – A group of unknown people reportedly attacked three young men at around Base G Beach of Jayapura Utara Sub-district of Jayapura City on last Thursday.
Jubi’s trusted source wrote in email that on Thursday, 27 August 2015, at around 22:30 Papua time, a group of unknown people on an Avanza car kidnapped Elieser Awom, 25, Soleman Yom, 24 and Yafet Awom, 19.
“When these boys walked to a stall located about 100 meters from their home for buying cigarettes, they looked a grey silver Avanza car. As they walked towards the car, a light flashed right on their eyes that made them slightly blind. Then they were forced to get into the car and accused for thieving a motorcycle, so they must be brought the police station,” informant told Jubi.
However, they were actually not taking to the police station but being interrogated and tortured. Informant said they were interrogated in the car on the way from Jayapura Utara to Jayapura Kota, Abepura, Koya, Skouw and Sentani, certainly the road to Genyem, Jayapura Regency.
When arrived at Sentani, the road to Genyem at around 03:00, 28 August 2015, Soleman Yom and Elieser Awom were released and they both run. While running, people in the car shot them forth time, but they kept running.
“Both were running to the forest area near to sago village. They just came out on the morning to go to their relatives in Sentani for taking them home. They arrived at home at 11:00, and the family was shocked. Meanwhile, Yafet was still not come home. Therefore, his family came together searching him in everywhere between Jayapura City to Jayapura Regency. But two days later, he came home riding motorcycle taxi.
“Yafet said he was jailed at Jayapura Police Station on Friday, and released on Saturday. Despite escorting by the police, he went home alone by motorcycle taxi. His family was shocked to find his condition was similar with two other boys when he arrived,” he said.
He further explained, due to being tortured, Yafet Awom get four bruises at the back. Up to now he is still traumatized and dizzy, and not able to speak. He got swelling at the right chest due to the hit of bayonet made him in pain when swallowing food. Some wounds in the thigh and scars in his body indicates he was stabbed and scratched by knife during the interrogation and there are also some wounds of cigarette burned. His face and eyes were swollen of being hit by upper knife and hand.
Soleman Awom was hit and kicked, and also stabbed at the neck. He also got some bruises in his body but the wounds are in recovery. Meanwhile, Eleiaser Awom is still in hospital and cannot walk due to internal injured by hitting on the chest. He was also stabbed at the back and right shoulder near. His face and lips were swollen.
Based on the victims’ statement, the kidnappers are four people. Three of them didn’t wear uniform while one wore the police’s t-shirt, trousers and shoes.
Until now the family could not accept the actions taken by those irresponsible persons. The family could not understand the motive behind this incident, why did they torture these boys,” he said.(Arnold Belau/rom)
————————————————————————————————————————————-
http://tabloidjubi.com/en/2015/09/01/two-soldiers-investigated-over-killings-of-civilians/

POSTED BY: ADMIN SEPTEMBER 1, 2015
Jayapura, Jubi – Two military personnel have been questioned over the shooting incident which killed two civilians and injured four others on Friday (29/8/2015) in Timika, the military said.
Regional Military Spokesperson Lieutenant Colonel Infantry Teguh Pudji said the unnamed military personnel are currently being questioned by Timika Detachment Military Police.
“After the incident, Cenderawasih Regional Military promptly sent investigators to the scene,” Teguh said via email received on Monday night (31/8/2015).
He said the investigation team included members of the Military Police, intelligence personnel and District Command personnel. He stated the Military Command would not whitewash the crime.
“If they are found guilty, they will receive sanctions and face the legal process. A soldier shall not hurt people’s heart; instead they shall nurture, protect and secure people at anywhere he was placed. We apologize for this incident,” he said.
Earlier, Major General Hinsa Siburian who recently assigned as Cenderawasih XVII Regional Military Commander promised will take legal process on two military personnel who opened fire against civilians that caused two people died and some injuered on Friday (28/8/2015). He said he would handle this problem according to the Military law.
“We will take action according to the law, as we have the military criminal law and so on. So there would be a legal process. I also have met the family of dead victims, and said three points, including legal process on military culprits who have harmed the people,” Commander Siburian said through email to Jubi on Sunday (30/8/2015). (Arjuna Pademme/rom)
————————————————————————————————————-
http://tabloidjubi.com/en/2015/09/01/abepura-prison-head-denies-filep-karma-is-free/
3) Abepura Prison Head Denies Filep Karma is Free
POSTED BY: ADMIN SEPTEMBER 1, 2015
Jayapura, Jubi – Political prisoner Filep Karma has refused sentence cuts granted to prisoners by the Indonesian Ministry of Law and Human Rights to mark independence day.
The head of Abepura Prison, Bagus Kurniawan told Jubi on Saturday (29/8/2015) that Filep Karma is still in jail.
“No, not yet. Who said he’s free? We have not received the decree from Jakarta. Media are often corrupted by rumors. We will inform media if he got remission or otherwise inform him if he received the Independence Day’s remission,” Bagus said.
When further asked about the decree, if it was received, does it mean karma should be free, he said it would be informed later to prisoner. We will told him and his family about the decree approving his release and he would be free by law,” he said.
But, according to Filep Karma, he will be still in jail for at least 3.5 years because he refused all remission offered.
“I was punished by the Indonesian Court to be sentenced for 15 years. But, now I was pushed to get my freedom on 17 August 2015. Based on my account, I will still spend my time in jail for three and half years because I refused all remission,” Karma told Jubi some times ago.
According to him, he refused to be granted based on his attitude during his prison. It would be acceptable if it was granted because of the political prisoner aware of his mistake or changes his ideology and proclaim Indonesia as his country.
“I don’t agree with that because this regulation was applied for criminals. It made as if the political prisoners are those who criminalized. It should be offered through political terms, such as he was granted for pardon in condition he signed a statement of loyal to Indonesian Government. I refused it. And now it’s offered without any condition, so I also refused it because I didn’t commit any crime,” he said.
According to the Prison Head, he is also still waiting for decree from the Ministry of Law and Human Rights, since Filep Karma sent a letter of rejection concerning to his remission. “Mr. Karma has sent a letter to Jakarta stating his rejection upon the remission. So, we are just waiting,” he said.
When urged with a question what about the political prisoner insisted to be in jail although the decree of release is issued, he said it depends on next decision. “Just wait. The Decree has not issued yet,” he said briefly.
“I, Filep Karma, herewith refuse remission of my detention in the commemoration of Indonesian Independence Day on 17 August. My independence day is the independence day of West Papua on 1 December,” stated Karma who was sentenced for 15 years prison since 2004. (Roy Ratumakin/rom)
----------------------------------------------------------------
Posted by AWPA Sydney News at 5:40 AM