2) Statement by Danrem 171/PVT is not in accordance with the law
————————————————————————————————-
http://www.ucanews.com/news/indonesian-food-project-violates-indigenous-rights-activists-say/74322
1) Indonesian food project violates local rights: activists
Project would displace indigenous communities in Papua 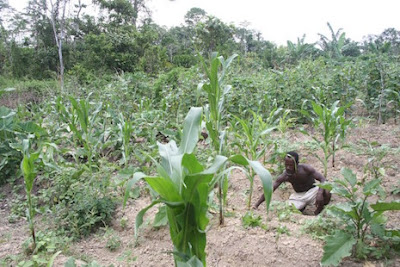 A Papuan farmer tends to his vegetables in the Indonesian province of Papua in this February 2010 photo. (Photo by Tjahjo Eranius/AFP)
Ryan Dagur, Jakarta Indonesia September 24, 2015
Plans to revive a massive commercial agribusiness and biofuel plant in the Indonesian province of Papua violate the land rights of the indigenous and local communities who have inhabited the region for generations, Church and land rights activists said.
The Merauke Integrated Food and Energy Estate project would convert about 1.6 million hectares of land used by the indigenous Malind people into a plant for food, timber and biofuel production. Activists said the project will displace most indigenous groups from the area and introduce drastic changes to their way of life.
"We call this robbery," said Sacred Heart Father Anselmus Amo, director of Merauke diocese's justice and peace secretariat.
Father Amo said indigenous groups were almost entirely excluded from the decision-making process right from the project's outset.
"We have warned [the government] of [the project's] manipulative process since the beginning," he told ucanews.com.
The project was initially announced in 2009 by former president Susilo Bambang Yudhoyono, with the goal of helping the country raise production on crops like rice, corn and soybean.
The project stalled over land rights concerns, human rights abuses, the disruption to conservation areas and the displacement of indigenous communities.
In May, President Joko Widodo announced plans to relaunch the project and said that the area allocated to it would be expanded to 4.6 million hectares.
"The project is full of bad practices, and it is difficult to expect that [the project] will bring about any positive impact on Papuans. Instead, what happens is marginalization," Father Amo said.
According to Pusaka, a nongovernmental organization focusing on indigenous rights, the government so far has granted permits to 41 plantation companies to operate on 1.5 million hectares of land.
Pusaka spokesman Yosafat Leonard Franky said the plantation companies have destroyed the main livelihood of the indigenous people, clearing away thousands of hectares of palm trees. Sago, a starch extracted from the spongy center of tropical palm stems — and a major food staple for the lowland people of New Guinea and the Moluccas — disappeared because of the project.
"Sago serves as the tribal people's cultural and religious identity. It is used in the traditional ceremonies, such as birth and death. Its value is very vital," he said.
Many plantation companies failed to pay attention to the tribal people's customs, he said.
"[This project] will [cause] a humanitarian and ecological disaster victimizing the Papuans," he said, noting the project has affected up to 100,000 people.
Wahyu Wagiman of the Institute for Policy Research and Advocacy said the indigenous communities have already lost too much.
"All buildings related to their culture, including their customary law and way of processing food that was developed on the basis of nature have now gone away," he said.
————————————————————————————
2) Statement by Danrem 171/PVT is not in accordance with the law
Statement by the Executive-Director of the LP3BH  Speaking as the adviser of Semuel Jitmau  a member of Infantry Brigade 752 BIntuni Company E, I would like to say that the statementto the press by Regional Commander 171/PVT, Brigadier-General, Purnawan Widi Andaru on Tuesday alleging that our client is believedto have been involved in a murder that occurred in Bintuni on 25th August is tendentious and unlawful.  This is because up to now, neither the agency in the Indonesian Army, that is to say, the Military Police (POM) or the Regional Policein Bintuni Bay nor other institutions that have the authority in accordance with the law have drawn any conclusion as a result oflawful investigations to claim that our client is likely to have committed this murder.   Furthermore, neither the police nor the Military Police (POM), the agencies that have the authority, have indicated what the motive ofthis killing might have been, based on investigations, having now declared that he is a suspect.   In my opinion, this statement has been made despite the fact that there have been no investigations to suggest that my client  should beregarded as a suspect.    I would therefore urge POM to clarify what evidence there is todeal with this case according to the military criminal code and they should always abide by the principle of basic human rights.  We therefore urge  the Commander of Kodam XV11 Cenderawasih and POM XX11 to provide us, as the defence team of Prada Semuel  Jitmau, to beable to be present at all stages of investigations of this case.  We would also draw attention to the language being used in themedia with regard to this tragic murder here in Manokwari as well as in Indonesia. The Criminal Code (Article 338) talks about manslaughteror intentional killing.  We are at present gathering evidence to show that the media has been violating our client’s reputation  and that of his family.PeaceYan Christian Warinussy, Co-Ordinator of the Defence Team of PradaSemeual Jimau/Lawyer and Defender of Human Rights in the Land ofPapua/Executive-Director of LH3BH-Manokwari.Translated by Carmel Budiardjo,Recipient of Right Livelihood Award 1995
-----------------------------------------------------------
Posted by AWPA Sydney News at 2:21 PM