1) Pacific Apologize to Papua for Being Long Time Silent 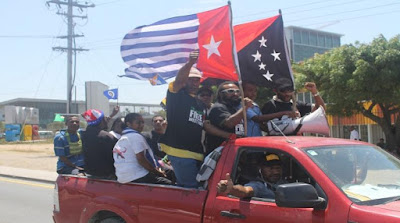 The PNG Union for Free West Papua and supporters of the Free West Papua movement are convoying around the streets of Port Moresby.
The vehicle convoy which started at Jack Pidik Park and proceeded along Waigani Drive through to the Sir John Guise stadium has stopped in front of the Kina Mart shopping mall area.
The Union leaders are speaking to members of the public who are gathered there about their cause and the issue of human rights exploitation that has powered their cause.
Union leader Kenn Mondiai says that the movement is growing and that the cause to free their Melanesian brothers and sisters is taking a regional and global stance.
The convoy made up of supporters from different walks of life have been chanting “Free West Papua” and actively waving their Morning Star flags and cheering.
Meantime, Mondiai says that there will also be a joint statement released soon about the collective efforts of regional support groups as well as their response to the positive outcomes of the recent PIF meet.
Tags:
West Papua
Author:
Julianna Waeda
———————————————————————————————-
HTTP://TABLOIDJUBI.COM/EN/2015/09/08/KNPB-DECLARES-SUPPORT-FOR-PIF/
4) KNPB DECLARES SUPPORT FOR PIF
POSTED BY: ADMIN SEPTEMBER 8, 2015
Jayapura, Jubi – The West Papua National Committee (KNPB), Papua Students, Youth and People Movement (GempaR) and other KNPB supporters held a peaceful rally in front of the gate of the Cenderawasih University in Jayapura City, Papua on Monday (7/9/2015) to express support for the Pacific Islands Forum conference being held in Port Moresby, Papua New Guinea.
During the rally, KNPB declared four political statements: first, free West Papua to safe the Pacific people from colonialism and capitalism. Second, free West Papua to save the Pacific people from global warming. Third, the people of Papua need assistance from Pacific people from genocide threat and forth, urge the United Nations to send a special team to investigate the political status of Papua and West Papua provinces.“We highly support the Pacific Islands Forum for accepting West Papua through the United Liberation Movement for West Papua as an observer to take an active role in talking and solving the problems within this region together,” the General Chairman BPP-KNPB, Victor Yeimo, said.
In the same place, the Operation Unit Chief of Jayapura Municipal Police Commissionaire Police Heru Hidayanto said the demonstration was running peacefully. “Although there’s a plan to do long march earlier, but it’s not realized. They only did the rally on location,” he said.
“For security purpose, we deployed 60 personnel of Jayapura Municipal Police, 30 personnel of Mobile Brigade and 60 personnel of Papua Police. We expected that under our personnel’s guard, they could run the rally in order and peace, because actually the police do not want the clash happened,” he said. (Munir/rom)

Updated at 8:02 pm on 9 September 2015
The Papua New Guinea Foreign Minister says his country will not do anything to endanger the good relationship it has with Indonesia when it comes to West Papua.
The situation in the Indonesian region is one of the five agenda items at the Pacific Islands Forum leaders summit in Port Moresby and there have been calls for a fact-finding mission to the province.
The plenary meetings have also been marked by protesters outside the venue calling for more action in West Papua.
Rimbink Pato says he acknowledges the call for a forum mission and it will be discussed but PNG is looking at other methods.
"Our strongest recommendation will be to work alongside Indonesia. Indonesia has just been made an associate member of the Melanesian Spearhead Group which is a sub-regional body and that is a starting point, and should there be some issues we will be looking to work through that and work together with Indonesia."
Mr Pato's comment comes after his New Zealand counterpart Murray McCully said he did not support a fact-finding mission to the Indonesian region by the Forum.
“I haven't seen a role for a fact-finding mission but I think a healthy discussion about this matter amongst leaders will be useful and I think that Papua New Guinea and the chair will bring a good sense of balance and judgement to that discussion."
———————————————————
http://www.thejakartapost.com/news/2015/09/09/trans-papua-highway-construction-continues.html
6) Trans-Papua highway construction  continues
thejakartapost.com, Jakarta | Archipelago | Wed, September 09 2015, 2:56 PM -
The Papua and West Papua Highway Center is currently completing the construction of a 4,325 kilometer trans-Papua highway to accelerate development in the provinces.
"Of the 4,325 kilometers, around 827 kilometers pass through wild forests," said head of Papua and West Papua Highway Center Oesman Marbun on Wednesday as quoted by tempo.co.
He added that they still need around Rp 15 trillion (US$1.05 billion) to construct the section of the highway going through the forest.
"We have until 2018 to construct the 827 kilometer road. From the current trans-Papua highway project, there are some roads that have been increased, some hardened and some asphalted," said Oesman.
The trans-Papua highway is set to connect strategic areas such as Manokwari, Sorong, Wondama and Enarotali in Pania, Nabire, Bioga, Sugapa, Ilaga and Mulia in Puncak Jaya, Sinak and Karubaga in Tolikara as well as Ilu, Jayapura and Elelim. The project will also include underpass roads, which will connect areas like Habema, Wamena, Paro, Mapenduma, Kenyam and Oksibil in Bintang Mountains, Dekai in Yahukimo and Iwur, Tanah Merah, Merauke and Waropko.
According to Oesman, one of the challenges is dealing with the locals' customary land rights. Regarding the issue, the regional government's help is needed, especially at the construction site.
“The regional government has been very helpful in negotiating the land compensation process,” said Oesman. (kes)(++++)
———————————

Mass transportation infrastructure is not solely being constructed on Java Island, President Jokowi stated after officiating a groundbreaking of a Light Rail Transit (LRT) in East Jakarta, Wednesday.

"By the end of this month, the development of a railway line will begin in Sulawesi. The groundbreaking was initially scheduled to be held in August, but I will officiate it only after the construction work has reached at least five to seven kilometers long," he noted.

The construction work must be carried out seriously, he emphasized.

A railway line will be built in Papua, he stated.

"Feasibility study for the railway construction plan in Papua is now underway and is expected to be completed in December this year. So, we will start the development work next year," he remarked.

The president expressed the need to elaborate on the plans as he did not want to give an impression that infrastructure construction work is only being carried out on Java Island.

The government will, in stages, construct mass transportation infrastructure across the country, he remarked.

"Everybody must help to make the infrastructure development projects a success. No mass transportation project should be delayed. It has to begin and be completed soon," Jokowi affirmed.(*)