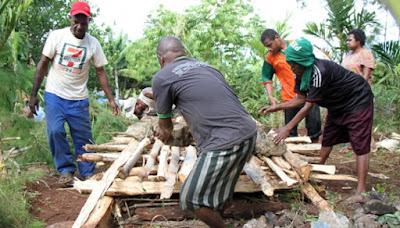 TEMPO.CO, Jayapura - Muslim community in Wamena, North Jayapura District, Papua, held an age old Papuan stone burning (bakar batu) festival to celebrate Eid al-Adha.
"Our tradition is bakar batu, both during last Eid ul-Fitri. This practice is not new, we conduct it every year,” said Kahar Yalipele, the local Muslim community leader, in Jayapura on Thursday, September 24.
Bakar batu is part of tradition of the Papuan people. It is a ritual of cooking together, started by burning stones until it simmers.
Red hot stones then laid in a hole and covered with foliage and tubers and meat on it. The pile of meat and tuber will then be covered again with smoldering rocks and foliage.
Kahar explained, Papuans are generally used to burn pig but the Muslim community replace it with chicken.
He also explained that this year's Eid ul-Adha, the Jayapura Municipal Government donated a cow to Paradise Asso Mushalla, their place of worship.
"We will distribute these sacrificial animals to the those in need,” he said.
ANTARA
———————————————————————————
http://www.thejakartapost.com/news/2015/09/24/papuan-muslims-celebrate-peaceful-idul-adha.html
2) Papuan Muslims celebrate  peaceful Idul Adha
thejakartapost.com, Jakarta | Archipelago | Thu, September 24 2015, 3:28 PM
Muslims in Tolikara, Papua, who clashed with a local church congregation in July, celebrated a peaceful Idul Adha holiday on Thursday.
Some 600 Muslims held a Day of Sacrifice prayer, supported by the Evangelical Church of Indonesia (GIDI) and attended by Social Affairs Minister Khofifah Indar Parawansa, as well as guarded by 347 police and military personnel, Antara news agency reported.
Khofifah said the Tolikara recovery program following the incident in July "has now officially ended". The government helped rebuilt the mushala (small mosque) along with 77 kiosks that were engulfed during the July 17, 2015 clash, when an angry mob destroyed a market, after prohibiting Muslims from celebrating Idul Fitri outdoors.
One teenager died in the Tolikara incident and 12 were injured. The clash attracted nation-wide attention as the small mosque was burnt down.
After the Idul Adha prayer on Thursday, Minister Khofifah gave two cows for the sacrifice, causing the grand total of cattle for the sacrifice to reach 32. Along with the minister, GIDI donated five cows, the Tolikara Regency Administration gave six and the provincial government provided two.
Separately, a Muslim community in Wamena, a district located 96 kilometers from Tolikara, held a bakar batu (rock over) ritual to commemorate Idul Adha.
A Muslim figure in the Jayapura District, Kahar Yalipele, explained that the ceremony was held during Idul Adha as a part of their regular program to celebrate annual Islamic festivals.
“Bakar batu, our tradition, was also held in the latest Idul Fitri holiday. It is our annual festival, not a new event for us," he said.
Non-Muslim Papuans usually roast pig on the burning rocks, but for Idul Adha, the Muslim Papuans roast chicken instead.
Kahar said Muslims in Wamena, Jayapura, are committed to preserving inter-faith harmony and peace in the district. For the event, the Jayapura
Municipality donated a cow for the sacrifice. (ags)
—————————————————————————————
http://tabloidjubi.com/en/2015/09/23/most-non-formal-education-institutions-in-papua-not-accredited/
3) Most Non-Formal Education Institutions in Papua Not Accredited
POSTED BY: ADMIN SEPTEMBER 23, 2015
Jayapura, Jubi – The head of Education and Culture in Papua, Elias Wonda, said the majority of non- formal educational institutions in Papua Province have not been accredited, raising doubts about the quality of education offered.
“Hopefully with the formation of Accreditation Working Group, the accreditation process can be done,” Elias Wonda told Jubi in Jayapura city on last week.
He said he hoped, after accreditation, the non- formal education can produce quality workforce to develop Papua.
For information, on the begining of this month, Papua Provincial Government Accreditation Working Group inaugurated the Non-Formal Education in the city of Jayapura.
In the inauguration, the chairman of the National Accreditation Board of Education Non Formal (BAN-PNF) Center, Boedi Darma Sidi hoped the formation of the Working Group (WG) of Accreditation of Non Formal Education in Papua Province is able to improve the quality of education in the province Papua, particularly the field of Non-Formal Education, “said Boedi Darma Sidi in Jayapura on Saturday (09/12/2015). (Munir/ Tina)
————————————————————————
http://www.thestatesman.com/news/latest-headlines/strong-quake-hits-papua-indonesia/92393.html
4) Strong quake hits Papua, Indonesia
IANS
Jakarta, | 24 September, 2015
A strong quake measuring 6.8 on the Richter scale jolted West Papua and eastern most parts of Indonesia on Thursday, but it did not have the potential to create a tsunami,
the Meteorology and Geophysics Agency said here.
The quake struck at 22:53 p.m. (local time) with epicentre at 31 km northeast of Sorong town and with a depth at 10 km under the sea, an official of the agency told Xinhua over phone.
The USGS reported the quake was of 6.6 magnitude.
Indonesia is prone to quakes as it sits on a vulnerable quake-endemic zone called “the Pacific Ring of Fire".
—————————————————————————