6) Political Elite Urged to be More Mature in Election Process
——————————————————————————————-
http://www.radionz.co.nz/international/pacific-news/283621/forum-to-give-west-papua-serious-thought
1)  Forum to give West Papua serious thought
The former, current and incoming chairs of the Pacific Islands Forum say they will take the concerns of Pacific NGOs on the situation in West Papua seriously.
Issues of West Papua and climate change are expected to be high on the agenda at this week's Forum leaders summit in Papua New Guinea's capital.
This week in Port Moresby, regional civil society organisations were given a rare face to face meeting with the past, present and future chairpersons of the Forum.
The leaders said they would take the concerns of Pacific NGOs on the situation in West Papua seriously.
The Pacific Network on Globalisation's Joey Tau said the reaffirmation added to the growing voices of Pacific peoples seeking a moral stand on human rights abuses in West Papua.
"There is tremendous support throughout the Pacific. We have the solidarity movements in Fiji, in Solomon Islands, in Vanuatu and back here in Papua New Guinea who are basically calling on leaders to deliberate and act morally on the issues that are before them in regards to West Papua."
The regional NGOs have also called on Pacific Island leaders and Australia and New Zealand to come up with a united stance on climate change for the Paris COP 21 negotiations.
The spokesperson for the Pacific NGOs Ann Singeo from the EBIIL society told the leaders to secure a safe future for people in the region.
“We are hoping that they at least have a united voice in the Paris COP 21 in December, so that they can at least unite on certain grounds to speak for at least the threat of climate change on the lives of our Pacific Islanders but also the mere existence of our countries and our people."
———————————————————————-
http://www.looppng.com/content/pacific-cannot-discuss-west-papua-alone-–-o’neill
2) Pacific cannot discuss West Papua alone – O’Neill 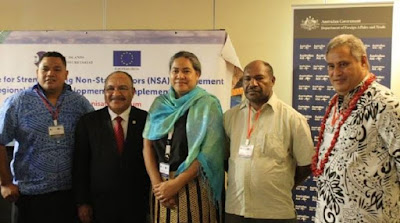 Prime Minister Peter O’Neill says the government will speak for West Papua as they are positively engaging with the Indonesian government to take on the West Papua Issue.
He said this during the meeting between the Pacific Island Forum Troika meeting with the Pacific Civil Society Organisation (PCSO) at the Gateway Hotel in Port Moresby.
He says the Pacific needs to have Indonesia at  the table for it to discuss West Papua issues.
A statement emphasizing the five key priority issues was  presented to the leaders
In this they called on Australia and New Zealand to join a united voice from Pacific seeking urgent just and ambitious climate action.
The PCSO also called on the leaders to effectively manage fisheries activities for an increased economic return.
“Without action your sovereign jurisdiction is under threat,” the statement says.
PIF leaders have also been asked to mobilise resources behind practical solutions for cervical cancer and to be more focused on ending preventable deaths from maternal mortality.
The civil societies groups also recognise that information technology is a “game changer’’ for the Pacific and call for leaders to look beyond an advisory committee to a visionary committee which incorporates a coordinated master planning approach to establish interconnected regional ICT infrastructure and the strategic development of ICT industry in the region.
“Our communities cannot afford to be merely consumers of other nation’s digital products and services; we must grow our own skills base and our own software and technology innovation industries in order to position our region for digital age economic and social sustainability,” says the PCSO.
Author:
Joy Kisselpar
———————————————————————————
http://www.smh.com.au/world/papuan-independence-leader-filep-karma-refuses-to-be-released-from-jail-20150908-gjhwfs.html
3) Papuan independence leader Filep Karma refuses to be released from jail

Jakarta: Papuan independence leader Filep Karma has flummoxed Indonesian authorities by refusing to be released from prison until he is cleared of treason.
He is the first prisoner who has refused to leave jail in Indonesian Republic's 70-year history, according to the director of prisoner and custody services, Imam Suyudi, who says there is no government regulation to deal with the unusual situation.
Mr Karma was jailed for 15 years for treason in 2004 after raising the Morning Star flag, used by supporters of Papuan independence.
He was due to be released from Abepura prison in Jayapura on August 17, after receiving remissions to his sentence due to good behaviour.
However Mr Karma wrote to Law and Human Rights Minister Yasonna Laoly and said he would not accept the remissions because he was not a criminal.
"I am in jail because I expressed my aspirations peacefully, I flew the Papuan flag and I demanded Papuan independence in a peaceful way. I even asked for a permit to police before staging my peaceful protest," he told Fairfax Media through a source.
Mr Karma said prison governor Bagus Kurniawan had tried to persuade him to leave the prison but he refused to do so until his name was cleared and the treason charge abolished.
"I heard he's going to Jakarta today to meet with the minister himself and report to the minister about my case."
The director of prisoner and custody services, Mr Imam, said there was nothing the prison could do.
"We cannot force him to leave. He still gets all the services and treatment provided to inmates even though he should not be a prisoner anymore. The only thing we can do is talk to him, hopefully one day he will agree to go out of jail."
A Papuan student activist told Fairfax Media independence supporters had persuaded Mr Karma he would look more powerful if he stayed behind bars.
"But I think it's wrong," he told Fairfax Media on the condition of anonymity. "It is better for him to see the latest situation in Papua today. It is more effective to fight from the outside."
The independence movement in Papua has proven impossible to eradicate for the last 50 years, according to a recent report by the Institute for Policy Analysis of Conflict
Instead of trying to crush the movement, the report said, the Indonesian government should try to avoid further radicalisation.
It said there were four main factors that exacerbated anti-Jakarta sentiment and contributed to radicalisation: ineffective policing, impunity for security forces, the division of Papua into smaller and smaller local government areas and undermining customary law.
"Every time a Papuan is shot by police – in a demonstration, an operation or in the course of an arrest - the political temperature rises," the report said.
"Security forces everywhere in Indonesia need to move away from opening fire as the stock response to crowd control, but nowhere is the need greater than in Papua."
On August 28, two civilians were allegedly killed by military personnel and others injured in a shooting at the Koperapoka Catholic Church complex in Timika, Papua.
TNI spokesman Major General Endang Sodik told CNN the sergeant was acting in self defence after he was attacked by locals.
The report, which was launched four days before the shooting, said the deaths of members of the independence movement were often explained as resulting from the victim pulling a knife or gun, resisting arrest or trying to flee.
"The default responses … no longer have any credibility, even if in a few cases they may be true," the report said.
"Papuan casualties at the hands of security forces are only occasionally investigated and punished, and the more senior the officer involved, the less chance there seems to be of serious prosecution."
At least two investigations had been opened into the killing of four people in Paniai in December but no results had been made public despite repeated pledges by President Joko Widodo.
The report also suggested ending the use of makar (political crime) as a charge for non-violent crime and proceeding with amnesties for non-violent political prisoners.
"Swearing loyalty oaths should not be a condition of release, especially since those committed to returning to the movement will do so whether or not they swear an oath."
- with Karuni Rompies
——————————————————————————-
http://en.tempo.co/read/news/2015/09/08/055698676/Tolikara-Ballistics-Test-Shows-Bullets-Not-From-Cops-Firearms
TUESDAY, 08 SEPTEMBER, 2015 | 11:16 WIB
4) Tolikara: Ballistics Test Shows Bullets Not From Cops` Firearms
Zoom Out Zoom In Normal
TEMPO.CO, Jakarta - M. Duwila from Papua Regional Police said that the ballistics test on the bullets of Tolikara Riot incident on July 17 has finished. He said that the bullets that killed a man and injured many others did not come from police’s firearm.
Duwila, however, refused to entail more details on the ballistic test. He added that the Papua Police have conducted disciplinary court towards police officers in charge of securing the area during the riot.
Head of Tolikara Police Soeroso was the one allegedly responsible of scrambling the personnel to the armory and ringing the bell when the riot broke down. Soeroso and 12 police personnel have been imposed sanctions from August 24.
MARIA RITA | ARKHELAUS
—————————————————————
http://tabloidjubi.com/en/2015/09/07/papua-needs-2691-local-facilitators/

POSTED BY: ADMIN SEPTEMBER 7, 2015
Jayapura, Jubi – The provincial government of Papuaneeds as many as 2,691 local village facilitators to be placed in 29 regencies and in Jayapura.
“Local facilitators must be at least graduates from junior and senior high schools and live in the village, where they will be placed,” said the head of Village Community Empowerment Agency (BPMK) of Papua, Donatus Mote, in Jayapura on Sunday (06/09/2015).
He said the agency has asked each regencies to recruit and send all the applicants to BPMK in order to be verified for further selection process.“This recruitment process is done in order to ensure that the candidates are able to speak and read Indonesian well,” he added.
Early, Regional Secretary of Papua, Hery Dosinaen said some villagers still need the help of assistants, specifically to develop and oversee its implementation in the field.“Papua still are still looking for more facilitators, especially in preparing the report on the use of funds. To that end, the recruitment will be done through the relevant agencies, “said Hery Dosinaen. (Alexander Loen/Tina)
————————————————————
http://tabloidjubi.com/en/2015/09/07/political-elite-urged-to-be-more-mature-in-election-process/
6) Political Elite Urged to be More Mature in Election Process
POSTED BY: ADMIN SEPTEMBER 7, 2015
Jayapura, Jubi – Ahead of the simultaneous elections in 11 regencies in Papua, Papua Police (Polda) urged members of the political elite to be mature in politics and participate in creating stability and security within community.
“We hope the political elite will follow the regulations in the election process, so conflicts can be avoided,” Paulus Waterpauw, chief of Papua Police stated last weekend.
He said he will work together with the high-ranking officers in Papua Police in order to create security so that development goals can be achieved, as well as establishing cooperation with the government in seeking the next generation of leaders in the future.“I am determined to provide the best service to the community and create a security to support government in development. I am ready to support all government programs, ” he said.
Former police chief of West Papua was also grateful given a chance to serve as Papua Police and became the first Papuan who titled rank of Inspector General of Police.“This is a great gift that must be answered together on the tasks ahead. Off course, we can face the challenges by building communication to all elements including the public, ” he said. (Arjuna Pademme)
—————————————
Posted by AWPA Sydney News at 2:28 AM